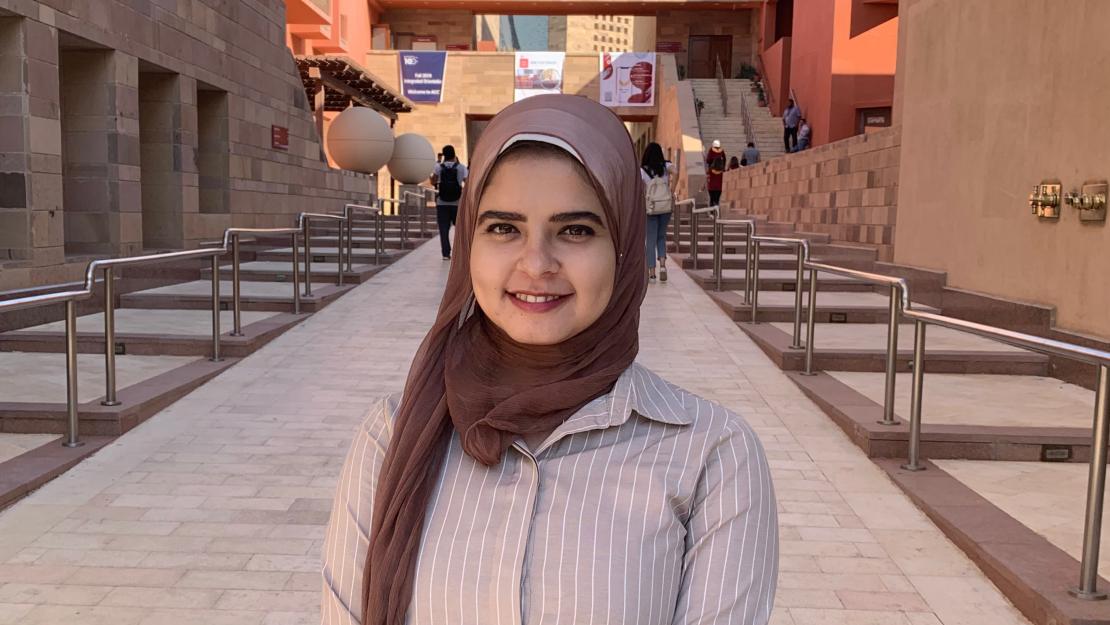 Pioneering a research registry on novel biomarkers found in early stages of dementia within the Egyptian population, Shimaa Heikal (MSc '20), PhD candidate at AUC’s Institute of Global Health and Human Ecology (I-GHHE), is among the first 10 awardees for the 100 PhDs in Africa program.

Competing for the award against 850 other applicants, Heikal joins as the only candidate from Egypt. Her PhD project is titled “Piloting a research registry for dementia: The Egyptian Dementia Network (EDN) registry.”

The journey began before Heikal applied to the program in April 2021, when she attended one of the International Brain Research Organization (IBRO) conferences hosted by AUC in 2018, where Mohamed Salama, visiting associate professor at I-GHHE, was a speaker. The discussion surrounding the issue of lacking accurate data on dementia was catalyzed by a member in the audience, a neuroscience researcher.

This intrigued Heikal, who began researching the topic. Eventually, she completed her MPA thesis project as the preliminary study to determine the feasibility of creating the database in Egypt, under the supervision of Ghada Barsoum, associate professor and chair of the Department of Public Policy and Administration at AUC, and Salama.

“I did not want to stop there, I wanted to take it further — so I applied to the 100 PhDs in Africa program in hopes of implementing the project and achieving the original dream of creating a registry for Egypt,” Heikal added.

The 100 PhDs in Africa program is run by a joint collaboration between the Swiss Federal Institute of Technology Lausanne, aka École Polytechnique Fédérale de Lausanne (EPFL), and Mohammed VI Polytechnic University (UM6P) in Morocco.

EPFL is one of the top institutes in the field of technology and science, globally ranked 14th by the QS World University Ranking, and under which the Excellence in Africa initiative established the 100 PhDs in Africa program to recruit PhD researchers in African universities. Heikal and her fellow awardees will go on to complete their research in collaboration with a co-supervisor from EPFL and then apply that research within Africa.

Heikal’s PhD research will be the pilot phase of developing a dementia registry on Egyptian patients by targeting three sites in Egypt, and which would then eventually be expanded. This pilot phase is vital in evaluating the effectiveness of the model, in order to ultimately be able to work towards a comprehensive and nationwide registry. The Egyptian team, together with collaboration with EPFL, will, through data collection of Egyptian patients, examine the biomarkers from the first pilot and discover new tools to aid in the early detection and diagnosis of dementia in Egyptian populations. She is conducting her research under the supervision of Salama and Hilal Lashuel from EPFL.

Aside from having completed one master's at AUC in Biotechnology and nearing completion of a second in Public Administration, Heikal also took first place in the Research and Creativity Convention’s graduate poster competition at AUC in March, for her poster titled “Enhancing the Effectiveness of Chemotherapeutic Agents by OT-515 and/or S-NACH.”

This was, for Heikal, “a wonderful moment,” and she felt a renewed sense of responsibility.

“We should now continue training new students, sharing with them what we have so that they can build on it — this is the ultimate success,” she said.

Although a separate project from the registry, working on the poster aided Heikal in learning basic lab techniques and scientific research methodologies that will come in handy during her PhD.

“My experience has encouraged me to continue pursuing my PhD in global public health and combine all that I have learned to work on an interdisciplinary project that will eventually benefit Egyptian patients,” Heikal said.

In February 2022, Heikal and Salama also published a paper in the Frontiers in Aging Neuroscience journal titled “The Impact of Disease Registries on Advancing Knowledge and Understanding of Dementia Globally” — alongside fellow researchers Yuliya Richard, Ahmed Moustafa, and Brian Lawlor.

Having applied to the 100 PhDs in Africa program in April 2021, Heikal passed the first phase in August 2021, completed an interview for the second phase in September 2021, and was finally accepted in February 2022. The almost year-long journey resulted in an array of excitement, but now, a longer journey begins to enact the pilot phase of the registries that will potentially immensely benefit the process of detecting dementia in Egyptian patients.

“It’s a huge opportunity for Africa. We can take on new projects that we weren’t previously able to do and didn’t have the expertise in,” Heikal said. “The EDN project could be a step in the road of developing disease registry databases in the African countries afterward.”