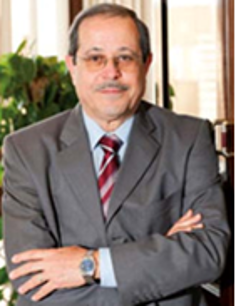 Ezzat Fahmy joined The American University in Cairo (AUC) in the fall of 1989 and played a key role in establishing and accrediting the construction engineering program nationally and internationally. Since 1989, Fahmy has held several administrative positions, including construction engineering unit head (1991-1995), chair of the engineering department (1995-1999), director of the interdisciplinary engineering programs (2001-2006), acting chair for the Electronics Engineering Department (2001–2004), Associate Dean for Undergraduate Studies (2006-2010), acting dean (2009-2010), dean (2010-2012). He had been a member of the provost’s tenure and promotion committee for several years. Fahmy supervised several master's and PhD theses at the AUC and jointly with national universities in Egypt. He is the supervisor of the first PhD graduate from AUC. He is the recipient of the Excellence in Academic Service Award from The American University in Cairo in June 2014.

Before Joining AUC, Fahmy Was the chief engineer at Ocean Steel and Construction Company (1978 -1980), lead engineer at Stone and Webster Company (1980-1981), and assistant/associate professor at Qatar university (1981–1989). He played a key role in establishing the Civil Engineering Department at Qatar University. He is the author and co-author of 137 papers in international journals and conferences and several technical reports and lecture notes.